Get in touch today

Fill in your details below and we'll get back to you shortly.

The next stage of the State Government’s Good Choice, WA marketing campaign delivered through the Buy West Eat Best (BWEB) program, has been brought forward to support businesses and champion the ‘buy local’ message.

The awareness campaign, first introduced to consumers in 2017, is a call to action to encourage shoppers to think local, buy local, and dine out locally.

Department of Primary Industries and Regional Development Food Industry Development manager Deborah Pett said consumers will once again be hearing and seeing the Good Choice, WA message in supermarkets, online, and across television and radio.

“The campaign provides a platform to celebrate the fresh, seasonal world-class food being produced across Western Australia,” Ms. Pett said.

“This is particularly important as consumers are placing increased importance on knowing where their food is originating from.

“Good Choice, WA is helping to get people thinking again about buying local to support our farmers, food and beverage producers, and processors as part of the recovery from COVID-19 impacts.”

Ms Pett said more than 70 percent of all research respondents felt the campaign was important to support the WA economy and encouraged them to buy local.

“The campaign messaging helps consumers to feel connected and informed about the WA food and beverage industry, and reinforces their decisions to buy local,” she said.

The WA Stonefruit Industry, first time partners in the campaign have found it invaluable to be involved to promote the fantastic stonefruit produced across the State.

“Being a partner in the Good Choice, WA campaign has added value to our industry-driven marketing program, with invitations to participate in a range of media activities and strengthen our retailer relationships.”

The Buy West Eat Best program is administered through the Department of Primary Industries and Regional Development.

BWEB has been supporting its 178 members from across the state, including producers, processors, retailers, restaurants, chefs, and distributors, as they have had to adapt and change their business models over the past few months.

THE SECRET OF LASTING WHITE FLESH

Most people know that if you don’t eat the whole apple immediately then the flesh turns brown. More often than not, this puts people off leaving an apple and coming back to eat more later.

Bravo™ apples have a very high flavonoid content. Not only is that awesome for your health, it means that the white flesh is ultra slow to turn brown. Tests have shown that a Bravo™ apple could still have white flesh 7 days after being cut.

What does this mean?

Do you have the child that loves apples but won’t have them in their lunchbox because they turn brown? Now your child can enjoy their favourite, healthy, lunchtime snack!

The fruit platter you wanted to put apples on, but were worried they might turn brown. No problems!

The two bite toddler that only wanted a quick munch – they can have the rest later!

You only wanted a small snack. No problems for you either.

See the table below to find out when the mango varieties will be available throughout the season. 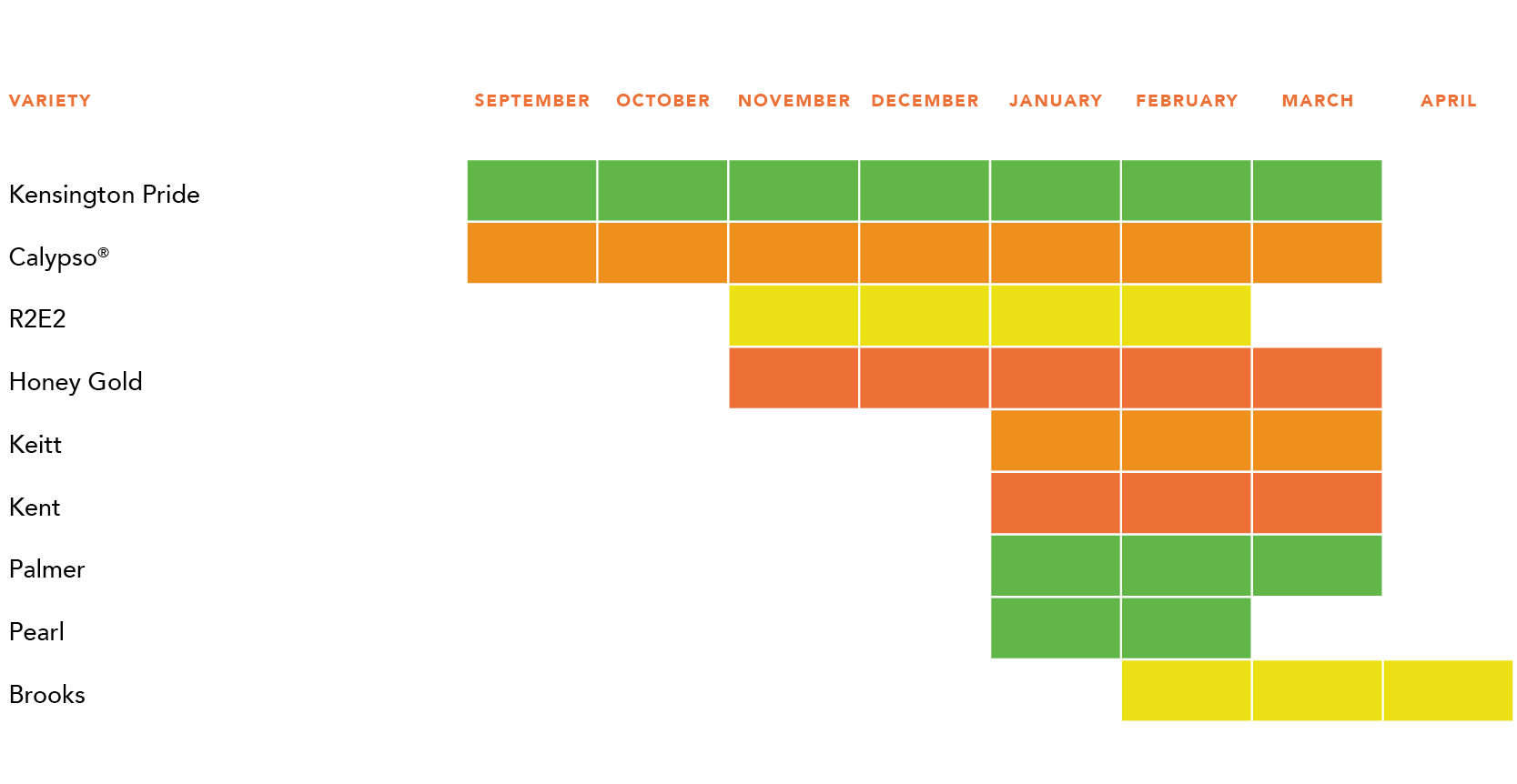 New apple variety proves to be a hit

Growers of a new apple variety developed in Western Australia are eyeing international markets after the first run sold out, despite the hefty price tag of $13 per kilo.

Flowers from the second crop of Bravo apples are beginning to flourish on trees across orchards in the state’s south-west and elsewhere in the nation with yield expected to be up significantly from last year.

With its distinctive dark skin and non-browning capabilities, the apple also proved to be just as popular with growers; so much so, new tree stock has also sold out.

Manjimup grower Harvey Giblett, who harvested about 15 tonne of Bravo earlier this year, said the apple had the rare ability to present great value for consumers and growers. “We are the only country in the world growing them at the moment which gives up the opportunity to charge a bit of a premium over and above other apples,” he said.

“It’s what we need to make it work for us growers as Australia has a high cost of production.”

Mr Giblett estimated production to be “triple or even quadruple” on harvest from earlier this year with growers removing other varieties to plant Bravo tree stock, known as ANABP 01, once it becomes available.

“As the tree matures, production will only go up,” Mr Giblett said.

“It’s still a way off yet, but it could one day challenge the Pink Lady as the most popular export variety.”

The origins of the Bravo apple began 20 years ago following the crossing of seeds from Royal Gala and Cripps Reds varieties, with the resulting tree stock further developed at a research centre in Manjimup, a known hub for apple growers.

Although dependent on seasonal conditions, harvest begins in April.

Nadia Stacy, executive officer for Fruit West Co-Operative, said 30 growers in WA were now producing Bravo apples and the high price tag of $2 or $3 per apple represented a fair price for their work.

“It’s always a bit of a risk growing a new variety,” Ms Stacy said. “Given the long development process of the Bravo and the amount of work the growers put in, it was good that we were able to get that price.”

Ms Stacy said she was “confident” the average price of $13 per kilo would remain and consumers would continue to “embrace” Bravo apples.

“We’ve had nothing but good reports from grower’s about its performance,” Ms Stacy said.

“Because of the excellent uptake, we can only see bigger numbers with each harvest.”

Apple a hit despite price tag with bite

The apple was also launched in eastern states markets this year and Batlow Fruit Co-operative general manager John Power said it had proven a hit despite its price tag.

“We actually did some research on selling the apples at a range of prices to test the willingness of consumers to pay a higher price,” Mr Power said.”We proved the apple can successfully sell well above $11 per kilo. It performed much better than other varieties that retail much cheaper.”

Mr Power said the success had required the importation of more tree stock from WA for new growers in Victoria, New South Wales and Queensland.

“Every grower is looking to plant a variety that can make a reasonable return,” he said.

“Unfortunately, a lot of our older varieties are becoming less and less viable whereas there’s obvious proof the Bravo will buck that trend.”

Mr Giblett said the appearance, size and taste of Bravo apples would lend itself to an export market already enamoured with Australian fresh fruit.

“I’m certain it would succeed in the UK and other European markets,” Mr Giblett said.

“But ideally, we could also get it into the Asian markets given it is much closer, meaning there’s less risk and cost involved in shipping.

“We’re pinning a lot of hopes on this apple.”

Gently press the top of your avocado to test for ripeness. If it’s quite firm, it will be ready in a couple of days.

A mango a day…

As the saying goes, ‘an apple a day keeps the doctor away’. This old adage could well be used for mangoes because, like apples, they’re simply brimming with goodness. Australian mangoes are high in energy, low in fat, and are a great source of calcium and vitamins essential for good health.

A 200g serve of ripe mango (the equivalent of less than one mango) provides you with up to three times your recommended daily intake of Vitamin A and Vitamin C. Vitamin C, an antioxidant important in protecting the body from infection, is required in the formation of collagen, a protein that gives structure to bones, cartilage, muscle and blood vessels. Vitamin C also aids the absorption of iron, necessary for transporting oxygen from the lungs to cells all around the body.

And the good news doesn’t end there. Our Australian mangoes also provide more beta-carotene than any other fruit and are a rich source of fibre and potassium. Beta-carotene is a powerful anti-oxidant that can help protect the body against disease and also fight the signs of ageing by assisting with the growth and repair of cells, tissues and skin.

If you’re trying to shape up for summer, mangoes are ideal as a snack on their own or as part of a healthy meal. Half a mango contains only 230kj (60 calories) and because mangoes are low GI, most of their energy comes from carbohydrate which is absorbed slowly into the body, helping maintain healthy blood sugar levels, and keeping you satisfied for longer. Great news for the health conscious!

Whether you’re trying to shed some weight or just enjoy a delicious summer treat, sinking your teeth into a juicy Australian mango is the way to go.


Deprecated: File Theme without sidebar.php is deprecated since version 3.0.0 with no alternative available. Please include a sidebar.php template in your theme. in /home/membrillocom/public_html/wp-includes/functions.php on line 5579